Radiohead review – no bombshells but an amusing, exultant climax

Roundhouse LondonThe final nighttime of the bands residency has few surprise moments, but sees up for it in friendship and Thom Yorkes effusive stagecoach presence 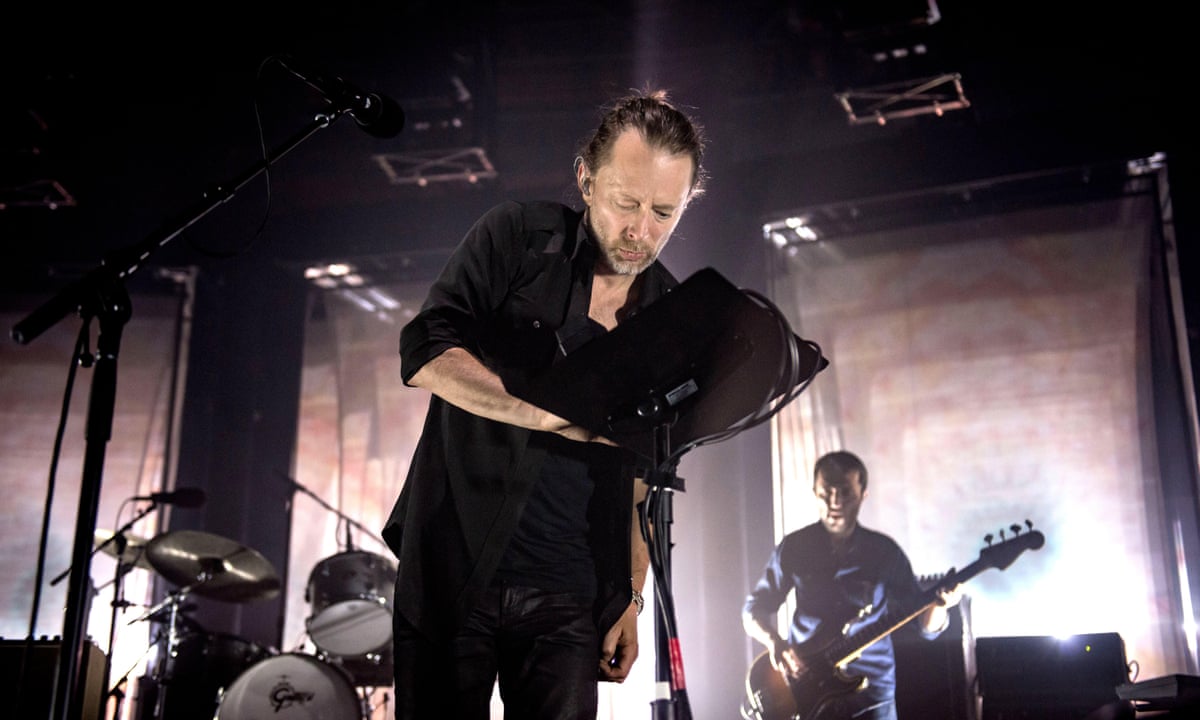 After three years, and an almighty kerfuffle over tickets, Radioheads mini-residency at Londons Roundhouse comes to an end. As a great deal of attention has been given over the past three darkness to those stayed outside without tickets as those inside take the plight of one young love who bought a last-minute ticket on Gumtree exclusively to descends foul of the venues stringent ID checks. Even a Twitter hashtag and an intervention from the Lad Bible wasnt enough to help him beyond the velvet rope.

For those who have been able to get through the doors, the wages ought to have plentiful. For so long, Radiohead, as a live know, have felt remote, both in their often recalcitrant behaviours and in their physical remove from the crowd in vast venues like the O2. The Roundhouse forces an unusual degree of friendship on a stripe of their size. Not exclusively have these been the most intimate Radiohead performances in some time, theyve too been some of the most fascinating, peculiarity organize directories chock-full of favourites, from The Bends onwards, as well as a handful of rarities.

The band open with their now customary pas of sungs from A Moon Shaped Pool. Despite the book having been out only for a matter of weeks, theres something worn-in and familiar about these hymns a fair few of them have been in the bands live repertoire for some time. Burn the Witch, deprived of the strings of the recorded version, feelings thicker and somehow more triumphant. . Everyone continues rapt in all areas of the new tracks, from the itchy, urgent Identikit to the languid soul of The Numbers.

One of the most persistent remarks about A Moon Shaped Pool has been that, in its is a lack of synthetic resonates and accessible ballad structures, it represents Radiohead finally becoming at ease with their early rockier incarnation. Surely theres a sense that the band are comfortable dipping into their various iterations. Where formerly you got the sense that older information was being acted quite grudgingly, here Yorke seems evenly at ease during Lucky as he does The Gloaming, becoming a wavy-armed raver during the course of its latters glitchy breakdown.

Yorkes rather crotchety honour seems to have been completely upended over these three nighttimes, and hes an immensely effusive presence on this final nighttime. During the first of two encores, a gentle acoustic rendition of Give up the Ghost from The King of Limbs is derailed by some errant whooping from a particularly boozy part of the crowd. Its these kinds of concept that is likely to prompt an angry walkoff in a less celebratory environment, but here Yorke cuts the way short with a apathetic fuck it, before jokingly suggesting that hell verify the perpetrator after the gig.

In truth, Radiohead can afford to write off the peculiar way, given the breadth of their output. Its hard to think of few cliques who could give one of the largest claps of the darknes from a B-side, but the latent peril of Talk Show Host copes it.

The only gripe you might have about this final Roundhouse date is that, bearing in mind the fact that bountiful back catalogue, there arent more of the sort of astounds that were being predicted by the superfans. A entry on this current tour for Yorkes lovely piano-led portrayal of Like Inventing Layers, all reeling arpeggios and quiet dismay, demonstrates deeply satisfactory. But theres no surprise on high levels of Creep, dusted off for a uncommon concert in Paris last week. Nor is there True Love Waits, an unreleased tour favourite that was resurfaced on A Moon Shaped Pool, and would have likely blown away the Roundhouses audience. Yet, having regard to the feast on offer, these looks a lot like minor quibbles, and as the closing Paranoid Android contacts its thrilling culminate, few am worried about what theyre not hearing.