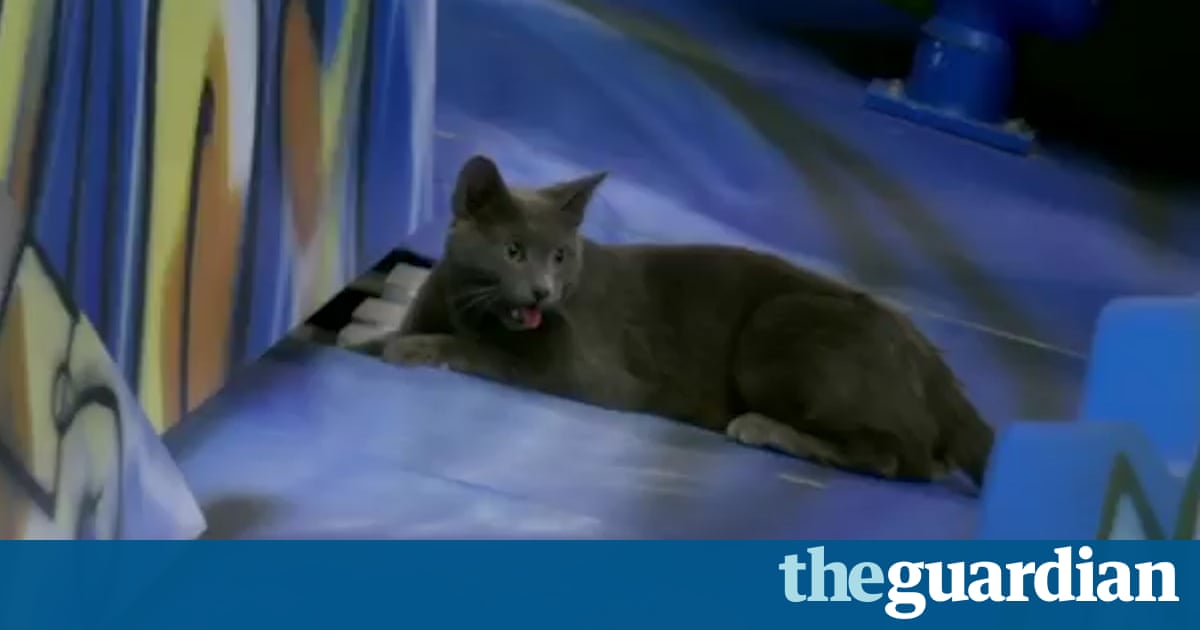 The Miami Marlins game against the Atlanta Braves on Tuesday night took a brief and unscheduled interval between the fifth and sixth inning when a feline led on to the field and scrambled up on to the home run figure at Marlins Park.

The cat, despite its obvious athleticism, failed to realm the ball or make a romp, but its climbing sciences did outline clapping from the 36,519 crowd.

Both gives of actors stopped when the “cat-o-nine-tail” gray-haired, sleek, probably not a bad base-stealer entered the field of play. It passed along the outfield informing trail, shrugged off the attention of the members of Miami right fielder Giancarlo Stanton and a stadium hire, and jumped up into the Marlins peculiar/ terrifying home run sculpture, where it stopped for a short while and took a little rest.

The sculpture is triggered every time a Marlins player scores a home run fish move, music play-acts, and lasers glint for roughly 30 seconds. Marlins president David Samson said if any more home run were scored, the carve would not have been activated for suspicion of harming the cat.

Marcell Ozuna, the Marlins left fielder, who made the second of his two home run just before the “cat-o-nine-tail” entered the field of play-act, seemed the animals eyes on him for a good parcel of the game.

He stayed up there for four innings, he added. Every hour I went on justification, I looked up there and the feline was disguising its front. I said: What are you doing up there? In the last inning I didnt see it. I dont wondering where he went.

Ozuna, whose squad won the game 8-4, raced the notion that the cat had proved a lucky appeal, however. I abhor felines, he said.

The cat did not make itself available for purposes of post-game mentions. On Wednesday, the Marlins announced that the cat had scaped capture again, and run off into the night.