The Colombian IAM rider Jarlinson Pantano won a two-man sprint on stage 15 of the Tour de France, beating Rafal Majka on the drop-off into Culoz, but Chris Froome held his lead 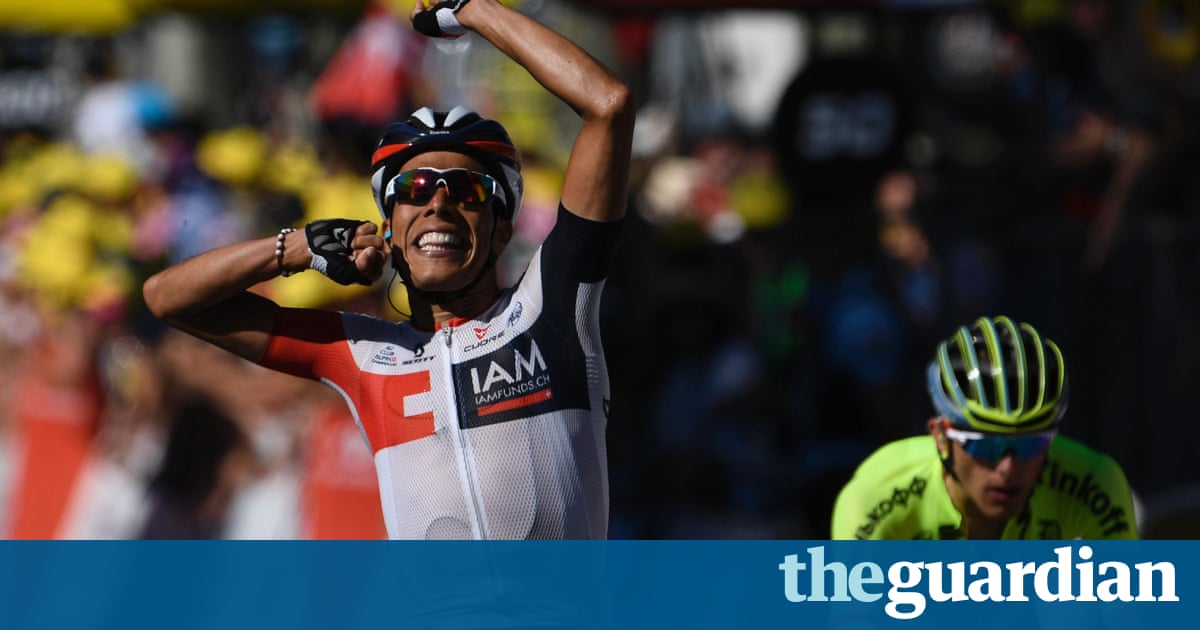 This 15 th stage had been earmarked by Chris Froome as a possible pitfall but there was little drama here as the hasten president and his crew skipped round it in fairly straightforward form and victory came to the Colombian Jarlinson Pantano of the Swiss IAM team. With little of note to describe during the stage, Froome looked back for the first time to the most amusing instant of the second week, his foray on foot up the slopes of Mont Ventoux on Thursday after his bike was broken in a disintegrate concerning a television camera motorbike.

It was quite a tumultuous instant, the Kenyan-born Briton pronounced. I got back on my motorcycle straight away, realised both fanny abides were break-dance and the motorcycle wasnt “re going away”. There was no save motorcycle, so I figured the best thing to do was to keep going forwards but it was also to move away from the impediment arena. I remembered I needed to get up the road here and ranging was my only option.

When it comes to options, Froomes rivals appear to have fewer with every successive daylight. Here they did not seem to have the nerves or the legs to make a wholehearted attempt to made him in hardship. On the final climbing of the Lacets du Grand Colombier the Italian Fabio Aru made a move but one that had been pennant up with the intricacy of a steamroller as the Astana team rode hard up the predating ascent in an futile attempt to burn off Froomes team-mates.

Perhaps the young Italian was provoked by Froomes reply when asked the day before how he rated his lucks. Froomes answer was a question: How far behind is he? Aru was more than five minutes behind on Saturday and that is unchanged. He was to participate in Alejandro Valverde but their brief foray had all the impact of a gelato mellow in the 30 -degree heat that region down on the Jura.

Higher up the mountain Romain Bardet moved his move, immediately before a difficult drop-off that should have privileged him. His only reward was a lost pair of sunglasses, which fell off his look shortly before Sky reeled him in. At the paw of the drop-off towards the finish Bardet and Valverde made a brief, abortive strike but that was all Froome had to worry about, beyond the everyday defies: biding safe, chewing regularly and critically in this heat boozing enough. Once again Nairo Quintana lay low; by now the conclusion has to be that he cannot strike rather than that he is biding his time.

Skys relentless tactics for keeping the yellow t-shirt have not gone in the four years since Bradley Wigginss victory in 2012. They hire the strongest climbers they can, capable of keeping an extremely high pace, and made them close to the hasten president. They ride so fast that the effort needed to get away from the lead group is so intense that it is impossible for anyone to open a crack of any note. You attack, you gain a few seconds, what can you do? Adam Yates, who maintained his third place overall, pronounced. At the moment Sky look invincible.

The only way in which this strategy is also possible countered is by concerted assaulting from long range to wear out the domestiques, so that the president in such a case Froome is left exposed and has to respond to criticizes on his own. Last year this happened only in the final two stages but Movistar were unable to press home their advantage; this year they do not look to have the leg. Froome pronounced afterwards he was surprised Sky had not been tested more: I thought it would be a perfect the possibilities for crews to throw us under pressure, especially with[ Geraint Thomas] having a puncture on the second last climbing: we were a husband down.

This was a harsh route, climbing the Grand Colombier and passing through the finishing line before going back up the ascent from another direction, Les Lacets, including a short, stunning plod up a series of hairpins grasping to a narrow ridge with a vacant on either side.

The stage victory was contended out up and, crucially, down the two climbs by the remains of an early flee of thirty equestrians, with Pantano developing along with Rafal Majka, who crested Les Lacets marginally in front but left the road on a left-hand bend on the drop-off, permitting the Colombian to catch him.

On the run-in from the paw of the drop-off to the line, they both watched one another suspiciously, permitting a chasing pair of Sbastien Reichenbach of Switzerland and Frances Alexis Vuillermoz to come close, while a few seconds further behind was the days hard-luck tale; the young Frenchman Julian Alaphilippe, probably the strongest of the escapees but unfortunate to digest a derailed chain on the penultimate descent.