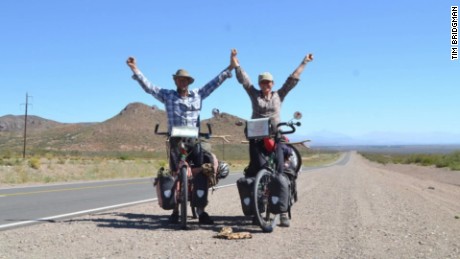 ( CNN) In one horrifying moment, on a lonesome superhighway in Bolivia, Tim Bridgman lost his soul mate.

He and his wife Sharon had been travelling their bicycles around the world to raise money for ShelterBox, an all-in-one disaster relief equipment with a tent and lifesaving supplies. They had set out in June 2012 from Nordkapp, Norway, and were more than halfway through their travel when Sharon was killed.
The couple, who did not have babes, planned to tour from Scandinavia to South Africa, then from Argentina to Alaska on mountain bikes. They had belonged to a cycling team for more than a decade.( Tim, a carpenter, lived with Sharon in Devon, England. She was a drug and alcohol addiction mentor .)
Like it.? Share it:
Tweet
Tags: Shelterbox, Tim Bridgman, Travel, Widower bikes around the world after wife's death - CNN.com