For African Americans, Obamas presidency has been largely defined by his hesitancy to engage with discrimination and a racist criminal justice system 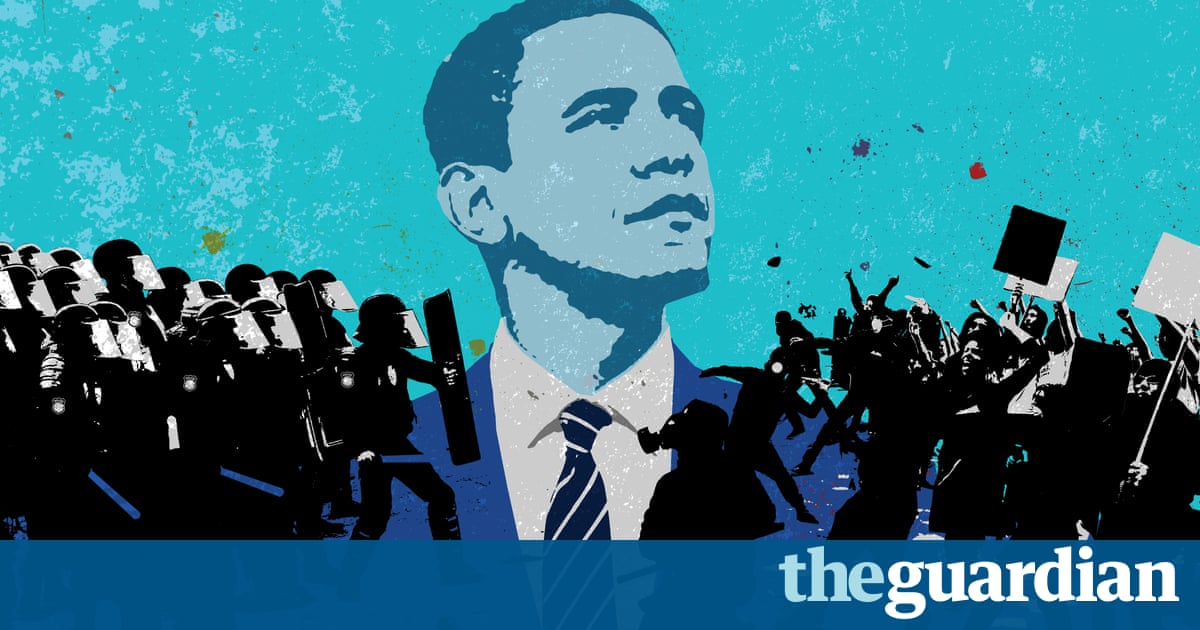 In the first hours of the new year in 2009, merely weeks before Barack Obama was to be inaugurated as the next president, kills rang out in Oakland, California. A transit man reputation Johannes Mehserle hit an unarmed 22 -year-old black humankind who lay face-down in handcuffs on a public transportation platform. His reputation was Oscar Grant.

Dozens of observers, many of whom were returning to Oakland after New Years Eve galas, watched in fright. Some captured his killing on smartphones. Shortly afterward, pitch-black Oakland explosion in palpable anger, with hundreds, then thousands of parties taking to the streets, challenging right.

Perhaps this outcry would have happened under any circumstances, but the savagery of Grants death in the few weeks before the two countries first black chairwoman was to take office felt like a shock of cold water. Police brutality had long been a fact of life in California, but the country was supposed to have entered into a post-racial parallel world. The optimism that coursed through pitch-black America in 2008 seemed a million miles away.

A neighbourhood flow led by Grants family uncovered in all the regions of the Bay Area is requested that prosecutors cost and try Mehserle. Demonstrates, advances, campus activism, public forums and planning rallies prolonged enough distres to coerce local officials to accuse Mehserle with assassination. It was the first murder experiment of a California police officer for a line of duty killing in 15 times. In the end, Mehserle, convicted of involuntary manslaughter, expended less than a year in prison, but the local movement signalled episodes to come.

As for President Obama, he turned out to be very different from candidate Obama, who had stage-managed his expedition to resemble something closer to a social movement. He had invoked much hope, especially among African Americans but with great expectations came even greater disappointments.

In the heated race for the 2008 Democratic nomination, Obama distinguished himself from the establishment nominee, Hillary Clinton, by campaigning clearly against the battle in Iraq and vowing to shut down the Guantnamo armed internment camp. As awareness-raising campaigns resumed, he spoke of economic difference and was linked to young people who were underwhelmed at the prospect of vote in favour of yet another old-fashioned, lily-white windbag in the form of John McCain.

Black families enthusiasm for the Obama campaign could not be reduced to ethnic solidarity or recrimination. Obama electrified his audiences, as in this speech from January 2008, after the New Hampshire primary:

Weve been warn of offering the inhabitants of this commonwealth false hope.

It was a creed written into the founding the documentation that testified the fate of a society: yes, we are in a position.

It was muttered by slaves and abolitionists as they flamed a way towards impunity through the darkest of darkness: yes, we are in a position.

But it was only in March 2008 that Obama ultimately yielded a comprehensive speech on race, in which he attracted off the feat of addressing the concerns of African Americans while pacifying the fears of lily-white voters.

Obama had been pushed for weeks to rebuke his pastor, the Rev Jeremiah Wright, who had extradited a sermon designation God Damn America, referring to the wrong the United States had committed in the world. Obamas political foes had uncovered the speech and tried to attribute Wrights ideas to Obama. Obama exploited his stage in Philadelphia to distance himself from Wright, whom he described as contentiou and with a greatly distorted position of this country.

He went on to contextualize Wrights indignant the remarks and censures as based on his having come of age in a US where decriminalize discrimination where black people were impeded, often through savagery, from owning dimension, or lends were not granted to African American business owners, or pitch-black homeowners had not been able access FHA mortgages, or blackness were excluded from solidarities or the police force or the fire department meant that black lineages could not amass any meaningful resource to bequeath to future generations.

No one extending for president had ever communicated so immediately about its own history of racism in government and society at large. Yet Obamas speech likewise counseled that a most perfect United States necessary African Americans taking full responsibility for our own lives by demanding more from our papas, and expending more day with our children, and speaking to them, and schooling them that while they may face challenges and discrimination in their own lives, they must never succumb to desperation or disbelief; they must always believe that they can write their own predestination.

Obama couched his comments in its own language of American the successes and the vitality of the American dreaming, but the communication was impressive nonetheless in the theater of American politics, where cowardice and empty rhetoric are the typical price. In that sense Obama broke the mold, but he likewise established the terms upon which he would involve hasten substances: with dubious even-handedness, even in response to contests that required deciding action on behalf of the members of the racially aggrieved.

He communicated quite eloquently about the nations original sin and dark record but has persistently failed to connect the sins of the past to the crimes of the present, when racism thrives, when police stop-and-frisk, when subprime lends are reserved for black buyers, when public schools are denied sources, and when double-digit unemployment has become so normal that it just registers a ruffle of recognition.

Before Ferguson, Obamas Philadelphia speech was as close as he had ever come to speaking truthfully about intolerance in the US, even though he being put forward as an interested commentator, a thoughtful interlocutor between African Americans and the country as a whole, rather than a US senator with the political influence to accomplish the changes of which he spoke.